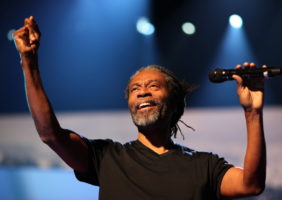 In my first article, I used my own words to explain what circle singing is, and what it means to me. Today, I want to introduce you to this incredible experience using the words of its "founding father."

Bobby McFerrin became famous all over the world for his song "Don't Worry, Be Happy," (even though that song is just the tip of the iceberg of the immense musical journey he built for himself!)

I figured what better way to help you learn more about circle singing than by listening to the musician who started it all! In this article, I've collected some quotations from interviews with Bobby McFerrin, to give insight on his experiences, and how he uses circle singing in his life as an international musician.

McFerrin: "I do this form of singing called circle singing and I do workshops and teach it. It's very simple because I think it's very natural: you get your singers in a circle, most of the time, I have them in parts. The leader stands in the middle, and they simply start to improvise, to come up with a part that they think maybe the altos or the sopranos or the tenors or basses could sing. Then they hold that part, then the leader comes up with other parts and assigns parts to the whole group. I'll tell you, after singing that way for 15, 20, 30, 60 minutes, with different leaders coming in and changing parts and rearranging them, and the singing doesn't stop - it's a very uplifting experience! I don't know what it is, but there is a real sense of empowerment when you're done".

Personally, I've been doing circle songs for almost 10 years now and every time I am amazed watching singers becoming more and more relaxed in their expression, they forget they are performing, because actually, they are not!

After that, you would feel like something in your mind, in your body, would be open. It's kinda hard to describe, but you could feel it in your body."

With the way our society is saturated with an obsession with perfection, it is healing to my soul to know that this form of art is completely disconnected from the urge of being perfect, and that there is a talented "ambassador" like Bobby McFerrin traveling the world and making music this way.

If there's one thing I want is for people to feel that sense of joy that I feel for just being able to sing, and getting a room full of strangers to sing together? what a joyful experience that is for me! I love it!"

The joy of singing. The disappearance of differences. Through the techniques of the singers that are close to each other in the circle, through the ability to be together on a stage, to be strangers - everything disappears during a singing circle. Surely this is something that we all need more of in our lives.

McFerrin: "I've always felt that artists have a huge responsibility because the culture looks at them as a way of interpreting what's going on. So I think is important for artists to offer things that are redeeming, things that gotta lift people, encourage them, so you do have to be careful with what you say, what the material is, cause there's a lot of material out there that bleeds violence".

In another interview, Bobby describes what music can do to you, using a metaphor to explain what happened to him the first time he went to a Miles Davis' concert: "it was like when you walk into a foreign country and you don't understand what anyone is saying but then you hear somebody speaking your language and you immediately gravitate to them, and then all of a sudden you become the best of friends because you're speaking with somebody who can understand you. And that was the same way I heard Miles playing and it's the same thing that happens most of the time for people who are doing some circle singing for the first time. They identify with the language: it's something they've been always wanting to do, they've been afraid to step out of the land, or improvise. All of a sudden they've been given a form or a basis to be able to just express themselves. You've got 20 people around you, speaking your language. You finally fit in, you have a sense of belonging. Music does have a very transcendent quality and speaks beyond any language". 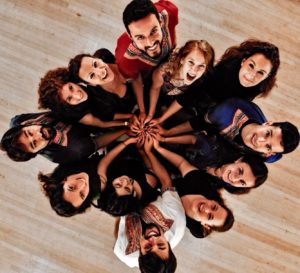