Join CASA Founder Deke Sharon on a trip down memory lane as we revisit the early days of the Contemporary A Cappella Newsletter!

Back in 1990 there was no a cappella community, no central watering holes, and no way for people to stay in touch. I dove in and decided to create a way for groups to stay in touch. Initially the CAN stood for the Collegiate A Cappella Newsletter, as my initial goal was to create a permanent bond between the 200 or so collegiate groups that would bump into each other during various concerts and events, mostly along the East Coast.

A few things I notice, looking back on this newsletter I laid out on my trusty Macintosh SE30 in Stratton Hall room 112 at Tufts University (where I also knelt on the floor, stapled each one by hand, and hand addressed them):

Dive in and enjoy the glimpse of the collegiate a cappella scene circa 1990. Little did we know… 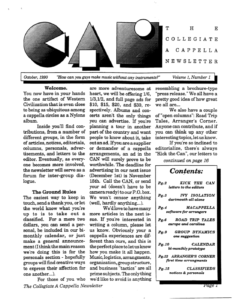 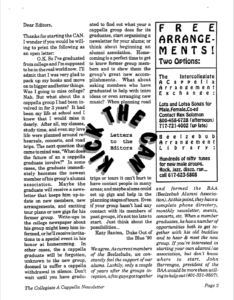 Posted in CAN, Memory Lane